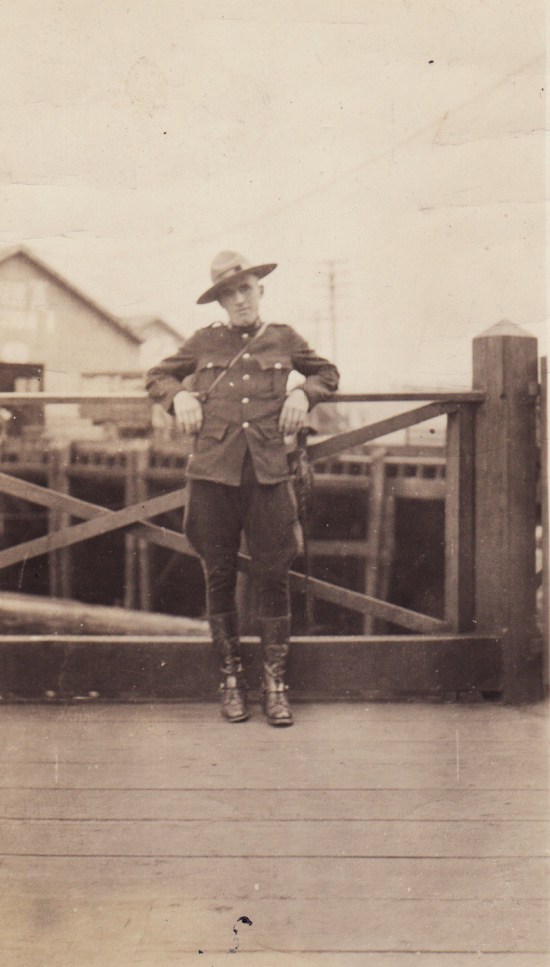 The Case of the Sultry Mountie, or, We Need to Talk about Cecil

I never knew my great uncle Cecil Bengry. Affectionately known as Cic’, this bachelor uncle seems to have lived in the background of other people’s lives. Even the pictures of Cic’ in old age that I found among my own grandfather’s (his brother) papers are faded and overexposed, their physical condition seemingly recreating the fog that surrounds Cic’s life. We know that he spent most of his life caring for others: animals on the ranch, his mother in her old age, and his brother’s grandchildren in his own later years. They remembered Cic giving them treats of ‘sugar sandwiches’, and knew him as well as anyone could, yet they didn’t know if he had an education, if he had friends, even what he did during the day. He is remembered simply as ‘always there. Good to us.’ Though always around, Cic’ somehow remained unknown. When he died, Cic’ left only one record behind: a small cigarette tin of photos. Inside, along with a child’s glass marble and a few family pictures, were snapshots of numerous men, including one of a Royal Canadian Mounted Police officer I call the ‘sultry Mountie’.

Unlike every other photo in the tin box, the picture of the Mountie included no information: no caption, no name, no date. He simply stands there, anonymous, leaning casually against a wooden rail with hips thrust forward, looking confidently and directly at the camera. Posing for effect, he invites observation and perhaps objectification. I struggled to understand this image and the homosocial collection of photos with which it came. The tin of photos inspired me to organize, with Amy Tooth Murphy, workshops on what we called ‘Queer Inheritances’ at the London Metropolitan Archives in December 2014. We wondered: How do we discern a queer life from incomplete personal effects whose existence and content are often mediated by other family members? How do we, as queer inheritors, navigate lives lived before many could proclaim to be ‘out and proud’? Ultimately, I wondered, was Cecil queer?

This post was originally published at “NOTCHES: (re)marks on the history of sexuality” on 26 May 2015 and subsequently as ‘The Case of the Sultry Mountie: Doing Family History Queerly‘ on the Huffington Post on 24 June 2015.