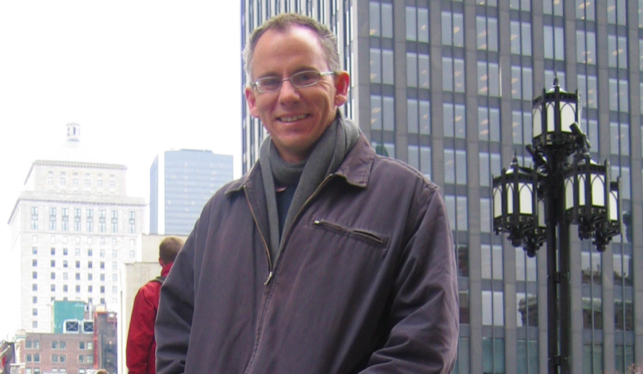 Interview: Paul Deslandes on the History of Male Beauty

In his recent History Compass article “The Male Body, Beauty and Aesthetics in Modern British Culture,” Deslandes explored the historical significance of male beauty. Across studies of sport and physical culture, disability and WWI disfigurement, and queer history, he argues, awareness and understanding of beauty and aesthetics offer insights not only to histories of masculinity but histories of British society as a whole. For this reason, Deslandes argues, historians must pay greater attention to physical appearance, value placed on male beauty, and the adornment and manipulation of the male body to better understand the British past.

I had the opportunity to interview Professor Deslandes about the arguments in his History Compass piece, its broader implications, and place within his current research.

In your History Compass piece you exhort historians to pay closer attention to questions of aesthetics, appearance and body adornment. What do these issues offer to historians of gender generally and masculinity specifically?

On a basic level, paying attention to the aesthetics of the attractive man, masculine physical appearance, and male body adornment (the focus of my History Compass article) reminds us that obsessions with beauty affected men and women equally in the past. Of greater concern to me, of course, is the way in which a focus on the physicality of gender expression might allow us to think more systematically not only about Judith Butler’s, now well-known, concepts of performativity but also about the ways in which gender and beauty ideals were literally inscribed on the face and the body. For historians of masculinity, who in recent years have turned their attention to reconstructing the ‘lived experience’ of male gender identities, the study of physical appearance and the personal experience of beauty and ugliness might help us to understand how militarism, athleticism, and imperialism (three areas that historians of masculinity have explored in great detail) influenced standards of attractiveness and personal gender expression. Finally, examining languages of beauty and ugliness (and, by extension, the dynamics of personal attraction) might allow historians of gender to examine more fully how our subjects expressed desire, even in source material that might, on the surface, appear to be wholly unrelated to sexuality.

What can fuller understandings of male aesthetics and beauty contribute to other historians who explore the “history of science, race and war, and … British society as a whole”?

I see great potential in these areas of study. Explicit and implicit references to beauty permeate the writings of nineteenth and early twentieth century biologists, physiognomists, phrenologists, and ‘racial scientists’. While some scholars have published innovative and nuanced studies of these fields (I am thinking here, most notably, about Sharonna Pearl’s recent book About Faces: Physiognomy in NIneteenth-Century Britain), relatively few have paid significant attention to the language of physical attractiveness (and the aesthetic comparisons that were made between ‘superior’ and ‘inferior’ peoples) in the massive volume of books, pamphlets, and articles that Victorian and Edwardian scientists produced. Similarly, while historians of eugenics have touched on some of these themes in recent studies, new histories of the eugenics movement will, in the future, need to pay much closer attention to aesthetics and beauty. Finally, historians of war stand to gain much by paying greater attention to beauty, in a similar manner to how Ana Carden-Coyne has explored these subjects in her recent book, Reconstructing the Body: Classicism, Modernism, and the First World War. Histories of wartime propaganda, injury and disability, military medicine, post-war memorials, and, even, the battle experience would all be enriched in substantial ways by paying closer attention to the aesthetic languages and experiences of combat, death, and disfigurement.

In your History Compass article you refer to youth, particularly in regard to men’s magazines. How might agedness also inflect our understandings of and research into the history of masculinity?

The vision of masculine beauty that dominated in the period under consideration in my article was one in which youth was valorized and celebrated–in advertisements, beauty manuals, magazines, photographs, and, later, film–as the ideal of physical attractiveness. This does not, of course, mean that physical appearance was not of concern to middle-aged and elderly men. In fact, an entire industry of beauty products for men, intended to eradicate baldness, correct poor posture, and hide or eliminate belly fat, were directed at male consumers over the age of forty. Historians of masculinity must, in my opinion, take seriously the aging process and the impact that it has had on male understandings of the self and impressions of physical appearance. While some historians of old-age have deliberated on these issues, I see great potential in the study of the middle-aged. Men in this age group were (and still are) often the most reflective historical subjects, precisely because they were forced to confront graying hair and growing paunches, and the sense of displacement that these physical experiences produced. In thinking about masculinity, it is also necessary to take very seriously intergenerational relations and tensions, as I attempted to do in my book Oxbridge Men: British Masculinity and the Undergraduate Experience, 1850-1920. Relations between men of different age groups allow us to understand how concepts of masculinity were contingent not only on class, racial, ethnic, religious, or sexual identities but also on one’s stage of life.

The history of masculinity is now a valid subfield among an established cohort of scholars. Where do you see it going in the future?

I have been extremely heartened by the growth of scholarship in this area of study, much of it very good. Historians working in the field have tackled a broad range of new subjects in recent years. Homosocial institutions continue to garner considerable attention but in ways that reveal not only the relational nature of gender but also the rituals, symbols, and everyday experiences of members. Some of this work has produced new insights about the relationship between men and domesticity (here I am thinking about Amy Milne-Smith’s work on gentlemen’s clubs) or encouraged scholars to rethink exemplars of British masculinity (most notably the Royal Air Force flyer during the Second World War-the subject of Martin Francis’s new book The Flyer: British Culture and the Royal Air Force, 1939-1945). I am also encouraged by the number of historians of British politics who have chosen to focus on masculinity in their considerations of governing styles and campaign rhetoric. The field continues to be enriched by practitioners of what some have called the ‘New Queer History’. The emphasis, in much of this work, on the connections between sexual desire and fantasy (as well as actual sexual practices) and certain masculine types, styles, or poses (I am thinking here about the ubiquitous guardsman) has yielded a number of very important insights.

In the future, I hope to see more studies that mine personal diaries, letters, and memoirs for evidence of the ‘lived experience’ of masculinity. As this sort of deep research is completed, our picture of masculinity is bound to become both more complete and more complex. Particularly important will be efforts to reconstruct the experiences of men with non-normative sexual desires and also those who were neither white nor middle-class. I would also like to see historians do much more on male/female relationships (both romantic and non-romantic) and pursue more detailed examinations of the history of heterosexuality. One area that I am particularly excited about (and which has taken off more fully in the United States than it has elsewhere) is the field of transgender history. We stand to learn much about masculinity as social construct, lived experience, and cultural practice by examining the lives of subjects whose gender identity and/or expression was different from their biological or birth sex. As is only fitting for a historian of male beauty, I see great potential in the future for those who are interested in studying masculinity as an aesthetic expression. A corollary to this, of course, is an emerging field that deserves further consideration–the material culture of gender. By examining the accoutrements of gender that were required by men to shave, dress their hair, bath, and prepare their bodies to be clothed, we stand to learn much more about the relationship between often nebulous concepts of identity or subjectivity and the very tangible world of products and objects.

How does this piece on the significance of male beauty fit in with your current research?

Writing this piece provided me with an opportunity to reflect on the state of the field, historiographically speaking. I am in the process of writing a book that examines the culture of male beauty in Britain from the 1840s to the present. This project begins with the rise of photography as a cultural practice and ends with a consideration of the impact of the internet on both conceptions of masculine beauty and the material culture of attractiveness and physical fitness in twenty-first century Britain. While preoccupations with physical fitness figure into this book, this is not principally a study of the physical culture movement or athleticism (areas that have been ably covered in studies by Michael Anton Budd and Ina Zweiniger-Bargielowska). My study departs from this approach, in part, by focusing much more directly on the male face. It also, however, attempts to provide more comprehensive coverage (and, hence, an overarching narrative) of masculine attractiveness by exploring topics ranging from the Victorian beauty industry to the rise of the teenage fan magazine in the 1950s and 1960s to gay pornography in the 1970s and 1980s. Along the way, the book I am writing will narrate individual stories about figures like the late nineteenth- century beauty entrepreneur Alexander Ross, the First World War poet Rupert Brooke, facially-disfigured soldiers, the plastic surgeon Harold Gillies, the twentieth-century artist Keith Vaughan, and David Beckham. The focus in this book is on showing how the study of male beauty can illuminate larger themes in British history while also establishing how standards of facial and bodily attractiveness changed or remained the same over a one-hundred and sixty year period.

This post was originally published at History Compass Exchanges on
17 February 2011.