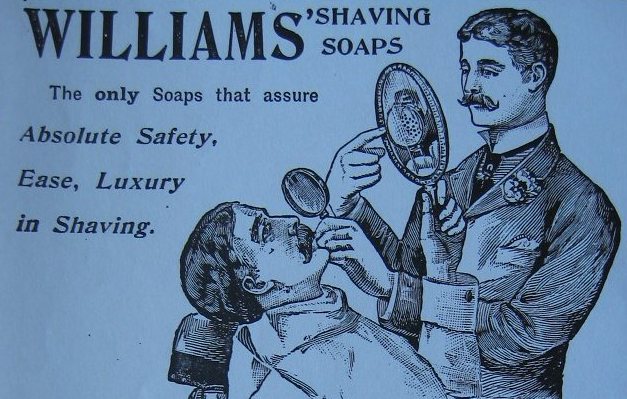 The Erotics of Shaving in Victorian Britain

Beardedness, or alternatively clean-shavenness, has long been an important signifier of manliness, inscribing crucial gender and sexual meanings onto the male body. But fashions in shaving are notoriously unstable, even in the nineteenth century, that idyll for the hirsute among us. Beardedness in nineteenth-century Britain, in fact, only reached its zenith in 1892, while the frequency of clean-shaven faces, lowest in 1886, continued to increase in popularity for the next 80 years. The necessity and expense of daily visits to the local barber, however, prohibited many from indulging in such luxury and before savvy marketers rooted the fear of the five o’clock shadow into men’s minds, a few days’ growth was often acceptable. Indeed, before the advent of the safety razor, many men might have agreed with the proverb: “It is easier to bear a child once a year than to shave every day.” Beardedness, and its intermediate variations, nonetheless had (and continue to have) definite implications for manliness and sexuality.

This post was originally published at “NOTCHES: (re)marks on the history of sexuality” on 10 April 2014.